A new addition to the collection - The Oric Atmos 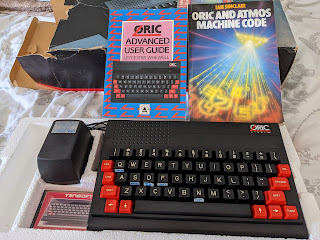 I never had an Oric growing up. In fact I'd never heard of them - my world was a sheltered bubble of ZX Spectrums, Commodore C64s and Amigas, and the odd Atari console I vaguely remember playing on round a friends house and scoffing at the "backwards" graphics (whilst secretly really wanting to play Ghostbusters one more time).

However, a lucky eBay auction later where I am the only bidder landed me with this little beauty.

Meet the Oric Atmos - a relatively rare 48k alternative to the zx spectrum from 1986 that just missed out on being popular. This computer sold well in France, and used a 6502 processor like the c64. This one is mint condition, boxed, and came with several useful books and (not so useful cause they don't work) cassette tapes - purchased on eBay of all places. Who'd have thought?
Fun fact: one can be seen in the background of the IT crowd on one of the shelves. No, not this one. 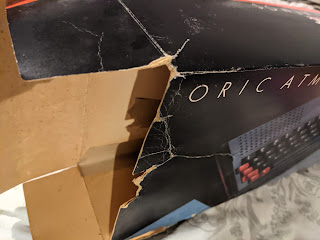 Memory: 48K (well, 64k actually but that's taken up by BASIC and needs hacking to get at) 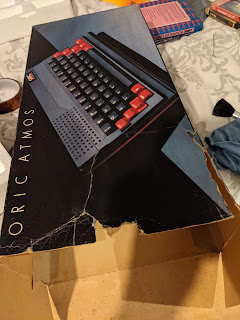 So, now all I need is a joystick expansion and something to load games into it that doesn't take 500 years to load and crash out half way through..
Posted by matt at 5:27 PM